This is Why Your Circuit Breakers Keep Tripping

Home|Electrician|This is Why Your Circuit Breakers Keep Tripping

Joe Swett
SHARE
By Joe SwettPublished On: November 18th, 2020Comments Off on This is Why Your Circuit Breakers Keep Tripping44.4 min read

[toc]Circuit breakers have been heralded as a necessary step in electrical engineering, and for a very good reason. If you live in a modern house, chances are you have a circuit breaker and not a fuse box like the days of old – but why is this? And, more importantly, why does it keep giving you trouble?

Circuit breakers and fuse boxes both come with some of the same problems. The main problem is that when a particular breaker (or fuse) is overloaded with electricity, the power is automatically shut off. With a fuse box, this results in a blown fuse, which was a tedious issue that meant you actually had to leave the house to fix it, but with a circuit breaker, it simply “trips” the breaker. 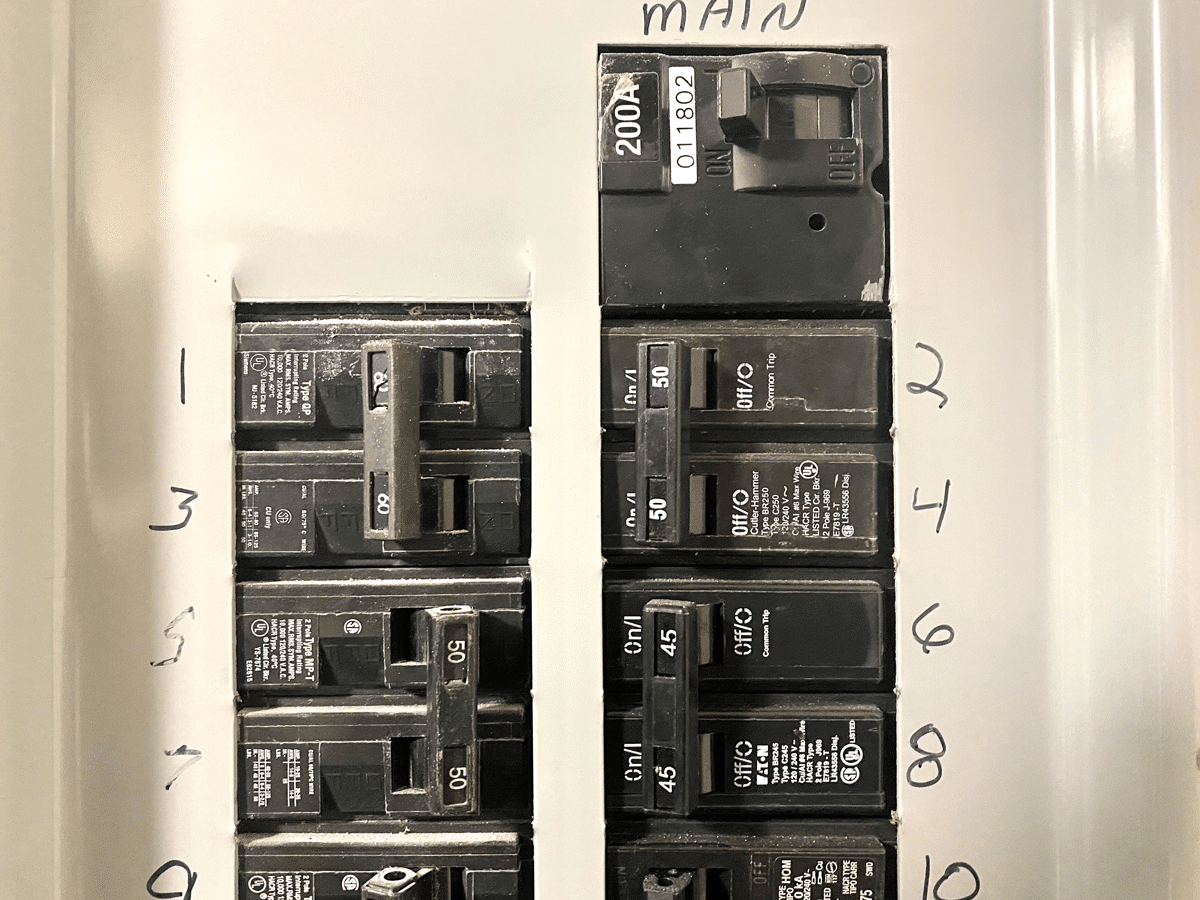 There are a few reasons why your circuit breakers keep tripping, and we’ll dive into all the big ones here. While each of these issues has definite solutions, be warned before trying your hand at amateur electrical engineering that some issues come with big danger signs attached to them. In other words, don’t try to fix anything that you aren’t knowledgeable about.

The Basics of Tripping Breakers

Before we get too into the details, let’s discuss how your circuit breakers function to begin with. The electricity you have running through your house runs through your breaker panel (service panel is another common term). The breaker panel contains all of the individual circuits you have in your home. Each is equipped with a handy “ON/OFF” switch to let you know whether a circuit is currently functioning or not.

You need different circuits for different areas, as if all your electricity ran through one circuit, your breaker would be tripping every five minutes. When a circuit breaker trips, it gets switched to the “OFF” position to prevent potential electrical fires that could result from an excess of electricity. Okay, now that we’ve covered some of the basics, let’s go into issue number one for why your circuit breaker keeps tripping.

This right here is usually the biggest reason why circuit breakers keep tripping in people’s homes. Individual circuits overload when too much electricity is running through them. When too much energy goes into one wiring loop, it can result in excess heat. To prevent fires, sparks, or general explosions, your breaker will trip, leading to all electricity being cut off from that circuit.

When a circuit breaker keeps tripping, it can be very frustrating to deal with, especially if you live in an older home. This is due to the fact that older homes have different wiring configurations than modern ones. Certain rooms might not be wired to handle powerful electronics and modern appliances like we’re acquainted with today. If you’re continually experiencing circuit overload on one particular circuit breaker, it’s likely due to the fact that you have too much power being used in one area of your home.

Fixing a circuit overload issue isn’t too complicated – you likely just need to shift the amount of power being utilized in that one troublesome area. However, with spacing and “feng shui” being taken into consideration, this can prove difficult for some people.

Maybe you feel that your house is perfectly set up, and that moving around appliances is too much to ask. If that’s the case, a re-wiring job might be necessary. This can be a tedious process, but consulting with a professional will usually let you know how much time and money such a procedure will take. Experts will investigate your home’s electrical wiring, troubleshoot the overload issues, and provide you with an estimate.

If you’re not entirely sure whether circuit overload is the actual problem, you can test this theory easily. Simply switch off the breaker, and turn off and unplug all electronic devices and appliances in the area connected to that circuit breaker. This can include lamps, computers, night lights, and air conditioning units.

After waiting a few minutes, switch the breaker back on and begin turning on your devices and appliances one by one. After turning each one on, wait a few moments to see whether your circuit breaker trips again. If any one device or electronic trips the breaker after being turned on, then you’re dealing with circuit overload, and might need to restructure your electrical situation.

This process can be complicated, as you’ll likely want to turn on devices/appliances in a myriad of ways to discover how many different things you can actually have plugged in and turned on before it’ll trip that troublesome breaker. However, the best solution might be to instead re-wire your home in that particular area.

A professional can re-wire a home to be able to handle all your devices at once and more, and can do so in a safe and expert manner. Unless you’re experienced in working with wires and electricity in general, we wouldn’t recommend tackling this process yourself, as mistakes can lead to short-circuiting, electrical fires, and a number of other safety issues.

Another reason why your circuit breaker keeps tripping could be short-circuiting. A short circuit occurs when loose wires that should’ve maintained better distancing are coming into direct contact with each other. When this happens, it can result in a burst of electricity coming through your circuit, which will result in a constantly tripping breaker.

Unfortunately, there are few ways to prevent wires from loosening over time. This can happen due to jostling from pets and children, curious mice deciding your wires are the perfect snack to gnaw on, and general lack of maintenance. Wires could be loose in a switch, an appliance, or an electrical outlet itself. Since there are so many areas to investigate, this problem can be difficult to diagnose and fix by yourself.

To investigate whether you could be dealing with a short circuit, you can perform a similar test to what we described earlier. If plugging anything into one specific outlet consistently trips your breaker, then the outlet likely has a short. Don’t plug anything into this outlet until it is fixed, or you could receive an electrical shock.

An appliance with dilapidated wiring will automatically short upon being plugged in, which should instantly trip your breaker, so if an appliance consistently trips on multiple breakers, then it needs to have its wiring repaired to be used properly. Similarly to a shorted outlet, don’t use this appliance until it is repaired.

Tripping circuit breakers might also be due to ground faults. As you might know, electricity is always searching for the ground, for whatever reason. Sometimes, this can manifest in your home in the form of a ground fault, which is where electricity diverts from its intended path and decides to travel into the ground instead.

This is a frustrating problem, as it can difficult to diagnose and fix, except by professionals. Ground faults can occur from a loose wire touching metal, or from a pipe leaking into an outlet or switch box. Basically, as soon as another conductive source (like metal or water, which are both conductors) presents itself, electricity can change its course and continue on its quest to the ground.

Ground faults are now mostly a thing of the past, as modern wiring includes ground wires, the sole purpose of which is to provide any electrical currents gone awry with a route to the ground. However, this can still prove an issue if moisture makes its way into your outlets, appliances, or switches.

If you suspect a ground fault might keep tripping your breaker, then it’s time to call in a professional. As a conductor yourself, you don’t want to mess around with any electrical currents gone astray without the proper training or experience. Ground faults can occur from shoddy wiring as well, meaning that anyone repairing a ground fault will have to interact with potentially dangerous live wires.

Electrical injuries can lead to life-damaging problems that are best avoided. It’s recommended that you call in a professional to both diagnose and ultimately repair your ground fault issues.

If you encounter any electrical problems in your home, it’s our recommendation you call in a professional to deal with it. Without the necessary education and experience, trying to fix something you have no knowledge of can lead to serious consequences.

It’s estimated that there 51,000 electrical fires in the home every single year. These could have been avoided by qualified professionals attending to issues instead of inexperienced and unqualified homeowners. Call in a professional instead of trying to attend to the problems yourself – fires and shocks are best avoided when possible!

Powering Through the Storm: Different Types of Generators Available

Why It's Important to Replace Cloth Wiring

Electricians YOu can trust

We have thousands of 5 star reviews and strive to provide the best service in the industry.