5 Signs That it’s Time To Replace a Smoke Detector

Kyle Theil
SHARE
By Kyle TheilPublished On: March 9th, 2020Comments Off on 5 Signs That it’s Time To Replace a Smoke Detector45.2 min read

Have you had the same smoke detectors installed in your home for more than a decade now? If so, it’s time for you to replace them as soon as possible.

Generally speaking, smoke detectors are only designed to last for around ten years before they need to be replaced with new ones. Once they pass the ten-year mark, they often start to lose their sensitivity and aren’t always able to detect smoke like they used to.

Here are five signs that’ll let you know it’s time to throw an old smoke detector out and replace it with a new one.

1. Your Smoke Detector Is Turning Yellow

Lugging around a ladder to check every smoke detector in your home for a “manufacture date” seems like a daunting process. Our electricians have weighed in on an industry tell-tale trick to tell if your smoke detectors are getting old.

Old smoke detectors will begin to turn yellow over time.

Some people believe that smoke detectors turn yellow after spending years being exposed to dust in the air. Others think they turn yellow due to cigarette smoke coming into contact with them over and over again and causing them to become discolored.

But the truth is that old smoke detectors turn yellow for a much different reason. Most smoke detectors contain what is called bromine, which is used as a flame retardant. It’s utilized to help a smoke detector stand up to a fire so that it can do its job and alert you to the presence of smoke. 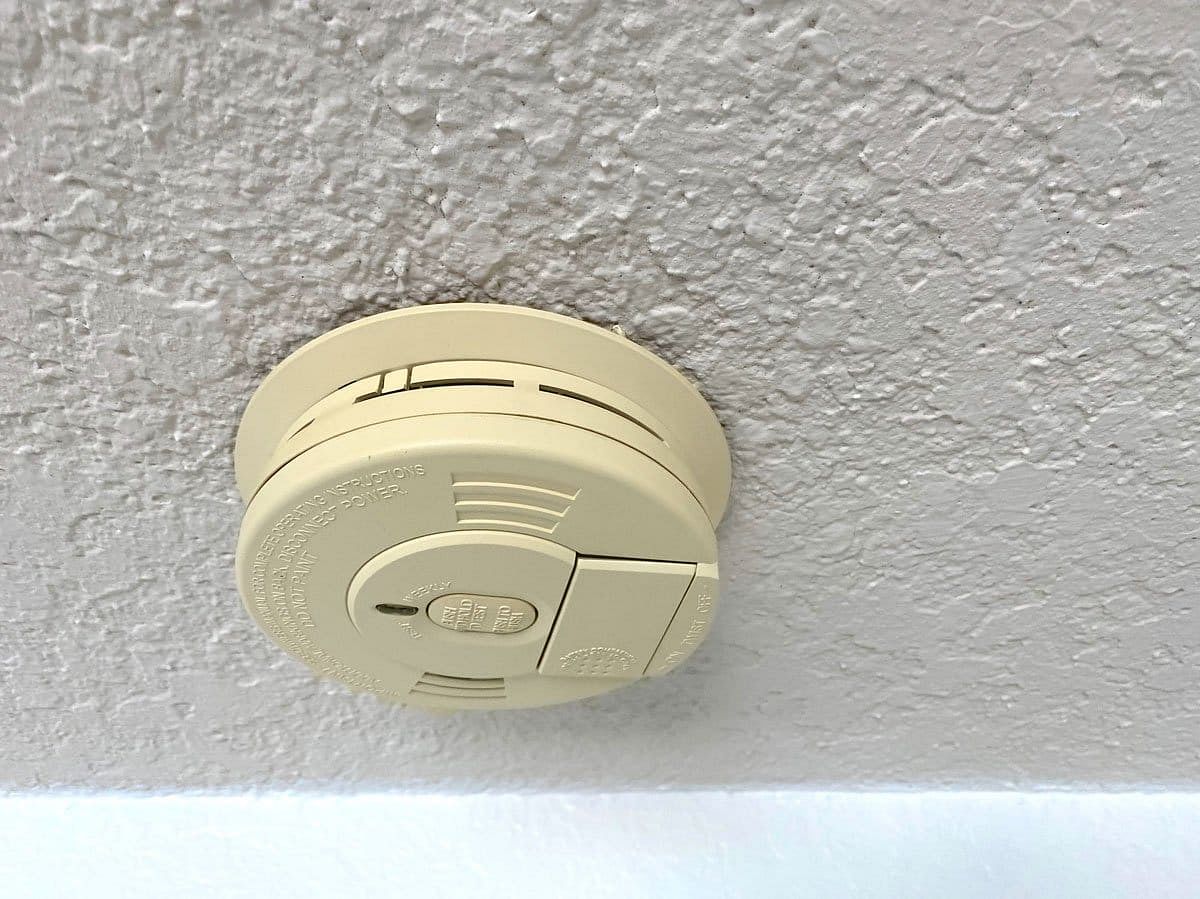 Bromine can cause a smoke detector to turn yellow when it’s exposed to things like heat, oxygen, and UV light. These take place naturally inside a home over time. It takes a while for this process to play out giving you an accurate timeframe to order a replacement.

You won’t have to wonder how often to replace a smoke detector when it’s turning yellow on you. It’ll be one of the most clear-cut signs that you need to have a new smoke detector put into place.

2. It Chirps Almost All the Time

Is a smoke detector in your home chirping pretty much all the time? This is not something that you should simply ignore.

If you don’t do something about the chirping, you’re eventually going to get desensitized to it. This could lead to you ignoring a smoke detector that’s going off for a real reason.

You’re also going to be putting your home at risk since chirping could be a sign that a smoke detector is on its way out. There are some smoke detectors that will chirp over and over (and over!) again when they’re on their last legs.

You may be able to get the chirping to stop once and for all by replacing the batteries in your smoke detector. But if you have fresh batteries in it or if you had it hardwired by an electrician and it’s still chirping, this should be a big cause for concern.

Arrange to replace your smoke detector right away to make the chirping a thing of the past.

3. It Doesn’t Respond When You Test It

The U.S. Fire Administration has come up with a list of guidelines for homeowners when it comes to smoke detectors. They’ve advised people to get into the habit of testing their smoke detectors at least once every month, if not more often than that.

If your smoke detector is functioning the way it should, it should beep several times (make sure you take a few steps back since these beeps are often quite loud!). This will let you know that you don’t have anything to be concerned about.

But if your smoke detector isn’t working the way that it’s supposed to, it won’t beep at all when you test it out. Or if it does beep, it will sound very muffled and won’t have much of an impact on you.

The USFA has found that about 60% of the deaths caused by fires every year take place in U.S. homes that don’t have working smoke detectors in them. You can make sure that your home doesn’t become a part of this troubling statistic by running regular tests on your smoke detectors.

4. It Goes Off for No Reason

You want the smoke detectors that you have in your home to be sensitive enough to pick up on the slightest hint of smoke from a fire. But you don’t want them to go off every single time a piece of dust blows by them.

As smoke detectors start to age, though, it’s not uncommon at all for them to struggle with sensitivity issues. They sometimes begin to pick up on problems that don’t even exist.

When this happens, some smoke detectors will start to go off all the time for no real reason. It can get to be so annoying that some homeowners will take their smoke detectors down and remove the batteries from them to get them to be quiet.

If you have smoke detectors like this in your home, replacing them is a much better option than continuously removing their batteries from them. You’ll be leaving your home susceptible to fires every time you take a smoke detector down completely and disconnect it.

You obviously don’t want your smoke detectors to go off after picking up on the presence of a few specks of dust. But you do want them to be sensitive enough to detect real smoke from a fire if one ever occurs in your home.

The only way you can guarantee they’ll be able to do this is by replacing them when they get old. It’ll ensure that they only go off when you need them to.

5. It Contains Faulty Parts That Led to a Recall

Every now and then, you should check to see if a recall has been done on the smoke detectors that you have in your home. This will take a little bit of extra effort on your part, but it’ll be well worth it.

Use the internet to see if you can find any information about a recall on your home’s smoke detectors. Check again in the coming months and years, too, since there is always a chance your smoke detectors could be recalled at a later date.

How to Replace a Smoke Detector

Contact us to find out more about the electrical services that we can offer to you.

What To Know About A Whole Home Surge Protector

Flickering Lights in Your Home: This is When it's a Big Problem

Book your AC tune up now before summer is in full swing and wait times increase.