The master electricians at Sunrise will install your outlet or switch professionally, beautifully and safely.

Looking for Switch and Outlet Repair or Installation?

Do you have a switch that doesn’t work? Maybe, you need a new plug in your bathroom or kitchen. What about adding a dimmer? Sunrise is the company for you.

Whether you are looking to install something new or repair an existing switch or outlet, Sunrise’s master electricians will do the job quickly, safely and with competitive prices.

Although, switch outlet installation may be accomplished without hiring a master electrician, hiring licensed personnel to do the task is a highly-recommended option. An electrician employed by a reputable electrical services company like ours is well-trained and capable of providing the best customer service, care and will leave your home in perfect condition after leaving the job. Not only that, an electrical contractor knows how to install the switches properly, recommends the best type to use and makes sure that these will work well.

How to choose a great contractor for your switch or outlet repair?

When looking for a company to handle the needed switch outlet repair as well as other electrical improvements, it is very important to conduct the needed online research. This is because doing so, allows you to identify the best electrical service providers in your area. But when the need to select which company to hire, it is important that you look at the service provider’s portfolio. Make sure to check if they were already able to provide the services you need to other customers and determine whether these were satisfactorily done or not.

For best results, go for a reliable light switch repair or installation service provider like Sunrise Electric. We guarantee that our licensed electricians are highly-trained to do a clean and remarkable job. Sunrise Electric also offers comprehensive maintenance packages that will keep your electrical systems running smoothly.

Or Fill Out The Form For A Representative To Contact You.

Want More Information About Switch and Outlet Installation?
Call Us at 727-410-0398 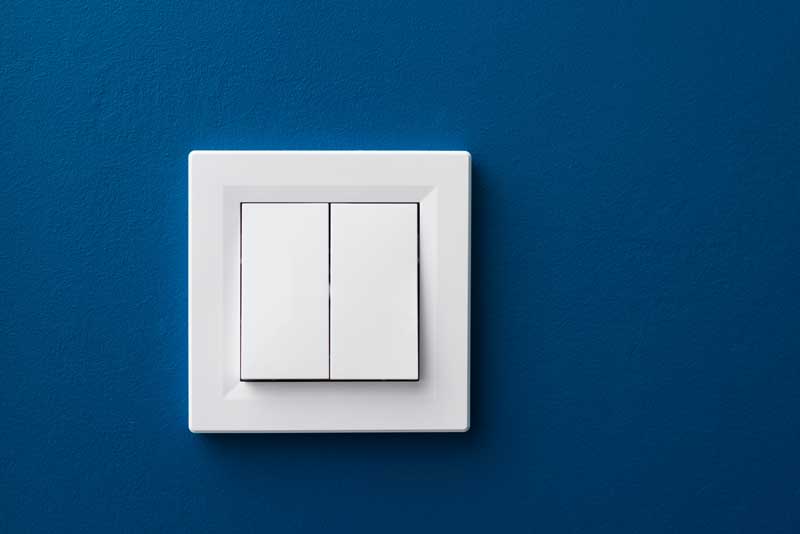 What does a Light Switch do?

A switch is designed to control the lights, fans and other various appliances in the home like a disposal. They come with a simple opening and closing mechanism that supplies and shuts the connection in an electrical circuit. When the switch is opened, the connection between the two terminals is cut, and the flow of electricity is stopped. Thus, the light attached to it is turned off. When the switch is closed, the light attached to is turned on. This is because the closing allows the terminals to establish contact and enable the electric current to flow into the circuit.

How does a switch work?

There are different types of switches. Each of these has its diverse working mechanisms. Among the most popular these days are the push button, toggle, selector, proximity, photoelectric and dimmer light switches. They are all used to control light fixtures but require different inputs to deliver their purpose.

The push button type of switch is a dual position device that involves pressing and releasing. This also comes with a spring that allows its button to return to original position when turned on. It also needs to be pressed again to turn the circuit off. The good thing about the push button switch is the fact that it can easily be installed. This can be accomplished using DIY methods. However, it is strongly advised that the installation be done by a licensed and professional electrician. It should be noted that the switch is involved in cutting electric current off and when not properly installed might cause a fire.

The toggle light switch is the most commonly used type of switch. This is usually included in most electrical systems that contractors install in residential and commercial buildings. This type of switch is highly-recognized since it usually comes with a lever which is commonly angled in two positions. The angling allows the circuit to be switched on and off. The switch is also properly labelled despite its very straightforward configuration to prevent confusion on the part of the user.

The selector switch, on the other hand, is usually equipped with either a rotary knob or lever that can be adjusted to multiple positions as a way of selecting a particular switch function.

The proximity switch is regarded as a modern type of switch. It has a sensor that controls the current supplied on the circuit based on the absence and presence of an individual in the area where it is used. It is also responsible for switching the lights off when the room is empty and turn these on upon sensing the presence of an occupant. Given the said mechanism, this switch is commonly used in modern homes and proven to reduce one’s monthly power consumption significantly.

The photoelectric switch just like the proximity type is also equipped with a sensor. It is responsible for measuring the amount of light present in the surrounding areas. It activates the circuit when the area gets dim and automatically turns off when the normal light level is restored. This is usually used on light posts or street lights.

The dimmer light switch is designed to regulate the flow of current that makes a light bulb emit an adjusted amount of light and provide the needed ambience to the area where it is used.

Enter Your Phone Number Below & We Will Give You A Call To Schedule An Appointment
Hurry! This Offer Ends January 31st 2020.